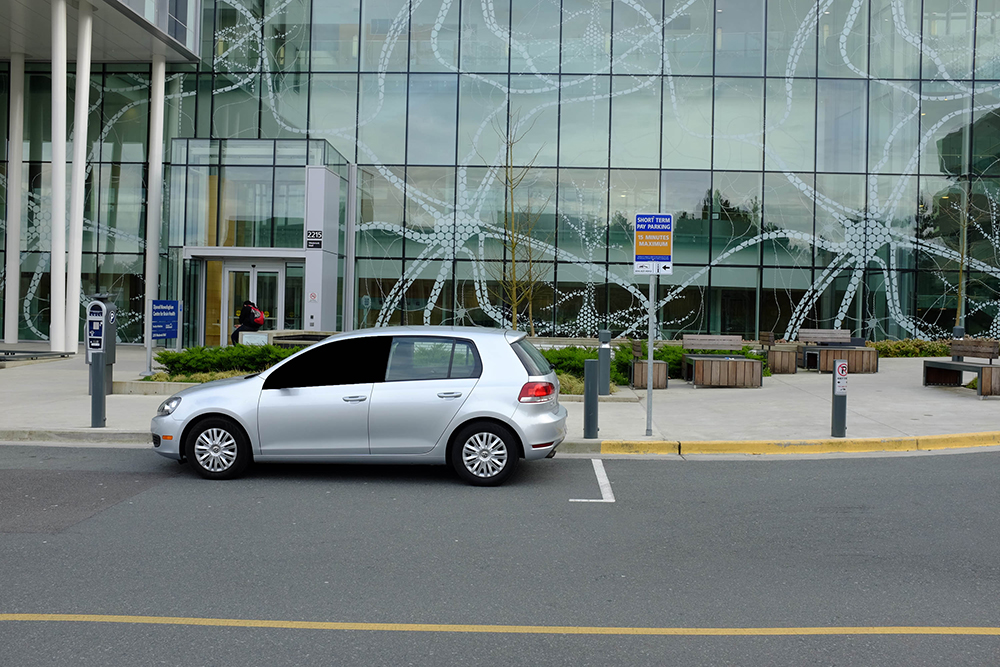 PHOTO CAPTION: Image shows car above a sensor within the stall and with the signage and meter. This is in front of the Centre for Brain Health (attached to and part of the Hospital)

Single space sensors are one of the most exciting parking technologies to be introduced in recent years. They have quickly gained acceptance throughout the industry because of the many benefits they offer both parkers and parking owners. The most obvious advantage can be found in their parking guidance function. By clearly and accurately indicating where open parking can be found, the sensor technology makes parking more convenient than ever before by eliminating the need for parkers to circle structures and lots looking for an open space. At the same time, the sensors collect data about who is parking in each space and for how long. This is invaluable information for helping owners and operators run their facilities as efficiently as possible.

The University of British Columbia (UBC) in Vancouver has found a new, non-traditional use for this technology. The University recently installed sensors in two areas on campus that have historically had trouble with drivers overstaying permitted parking durations. The areas are intended as drop-off points, but drivers tended to park for extended periods of time, which caused traffic congestion on nearby roadways. The sensors were installed to clearly indicate how long parking was permitted in each space, and encourage compliance with time limits.

UBC’s sensor program utilizes solar-powered Frogparking sensors, which are installed in the ground in each individual space and connected to the university’s parking management grid to provide real-time enforcement and utilization data. Nine sensors were installed at the UBC Hospital Complex and eleven were installed at the recreation center and aquatic centre.

“We began this program last August, and we are already seeing an impact,” said Brian Jones, Director, Parking and Access Control Services at the University of British Columbia. “The program has significantly reduced the abuse of pick up and drop off locations while increasing the level of compliance in adjacent parking.”

According to Jones, the effect has been particularly noticeable at the hospital. People are permitted to drive to the front door of the hospital and park for 15 minutes to drop off or pick up loved ones. However, in actuality, drivers frequently ignored the parking time limit and would tie up those spaces for much longer periods of time. It wasn’t unusual for patients to have difficulty finding parking when they arrived at the hospital because all of the drop-off spaces were full.

It didn’t take long for the sensors to address that problem, though. Patients and visitors are often at the hospital for repeat visits and users quickly adjusted their behaviors. And if the car isn’t moved at the end of their session, the system notifies enforcement officials. The system also monitors utilization, and what types of parking are in greatest demand on any given day.

“The sensors have made a huge difference,” said Jones. “Our challenge wasn’t a shortage of parking, it was compliance.

“The problem was particularly acute at the hospital,” continued Jones. “One or two minutes can be the difference between someone living or dying. These sensors are going to improve patient access and in extreme cases save lives.”

The program was also extended to UBC’s recreation center, which also had a long-standing problem with drivers using drop-off spaces for long-term parking. Eleven sensors were installed in the center’s drop-off spaces, and they permit 30 minute parking. As with the hospital sensors, the recreation center’s sensors notify enforcement officers when parkers fail to move their vehicles in time.

The UBC sensor program was developed in partnership with Sentry Control Systems, a parking solutions and technology company. Sentry represents a number of parking guidance and access and revenue control companies, and the university felt their wide range of experience and products would offer the perfect answer to their challenges.

“We chose Sentry Control Systems because they have a reputation as an innovative company that knows how to apply technology in creative ways,” said Jones. “We knew what we needed to accomplish, but we didn’t know how to do it. Sentry was able to come in and craft a solution that was unique—and which met our needs.”

According to Tim Flanagan, a principal with Sentry Control Systems, while UBC chose a non-traditional use of the sensors, it was good use of the technology.

“The Frog Sensors provided the perfect answer,” said Flanagan. “There’s no uncertainty anymore, and that in itself was enough to get parkers to use the spaces properly. As a result, enforcement really has been a secondary issue because people have been using the spaces appropriately.”

The university is so happy with the program that they are already starting to think about future sensor roll-outs in areas where there is high demand for pick up and drop off such as daycare facilities and service/loading zones.

“Going forward, I can see us installing sensors in all of the areas on campus with high demand, and in which we need high turnover,” said Jones.

According to Jones, the next areas of campus to get sensors will likely be the athletic fields and buildings requiring large deliveries. He also envisions the development of a UBC app, which would provide an actual count-down of time remaining on parkers’ smart phones. He also foresees connecting individual sensors to a space-specific sign indicating what type of parking is permitted in that space (i.e. short-term, handicap, etc.) and adjusting that in real time as needs change. He is also hoping to expand the program to include a loyalty app that will tie into other UBC parking services, such as its Car-To-Go vehicle sharing program.

“There’s so much we can do,” said Jones. “Because the technology gives
us real-time data throughout the day, the possibilities are endless. ν