Eligibility:  Open to CPA members from all sectors.

Entry Fee:  There is no entry fee.

Presentation of the Awards
The awards will be presented at the Annual Conference and Trade Show.

Regardless of the task, Donna is always ready to lend a hand to the Canadian Parking Association.  From organizing events for the Toronto Chapter in the early days of chapter development, to attending events, and conferences and sitting on various CPA committees, Donna has served this organization well as a long time member.

Says Donna’s boss Anthony Barbisan “This is really exciting news!  She’s going to be thrilled and we’re all proud of the work that she does here at York and supporting organizations like CPA and the Ontario Campus Parking Association.  Donna is a master at client management and is my go-to person for her perspective on the customer experience.” 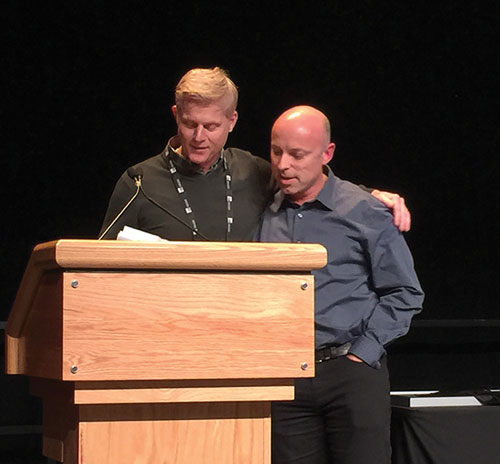 When Paula Nichols left the board she refused to leave the organization – she has continued to be of great assistance to our members by staying involved in the conference, the roundtable and in group discussions. She has helped many members by sharing her knowledge and enthusiasm. She has even helped make the AGM more relevant by asking questions and making suggestions for improvements – including for example – a simple but effective suggestion that we describe to members the CPA activities over the year before asking them to approve the board’s decisions.

Thanks Paula for your dedication and service to the CPA and its members – you set a great example!

Presented to an individual member of the Canadian Parking Association who has demonstrated a continued commitment to the development of the image of parking as a  professional industry.

A fixture around the CPA since its inception, Richard “Smokey” Smith has exemplified the term “mentor” for the parking industry, showing leadership and guiding many people through the early stages of their parking careers, including his staff and new members to the CPA.

Richard has organized, hosted and set the standard for networking in the Atlantic region over the years and has provided CPA members and the parking community in the four Atlantic provinces the opportunity to meet and share their parking experiences. He has chaired two annual conferences in Saint John and attended all but two of the 30 national conferences.

As a founding member of the Board of Directors and also as a Director on the Canadian Parking Foundation in past years Richard has co-ordinated the search for recipients deserving of the Ted Seeberg and Ed Keate Awards presented by the foundation at the annual awards luncheon.

Ken joined the CPA and has served as member, Director and Executive Member of the Board of Directors for 15 years. He is currently the Past President, and was Chair of the 2012 Nominations Committee.

Ken’s dedication to professionalism at the Canadian Parking Association has been evident throughout the years as he developed in his leadership roles, demonstrating commitment to the well-being of the Association and rolling up his sleeves to work beside his colleagues to the betterment of the association. Today, the association stands strong, thanks to Ken’s contributions.

Ken strives to ensure that new members coming into the CPA for the first time are met with a warm welcome and friendly offer to mentor and share his knowledge of parking and of the Canadian Parking Association.