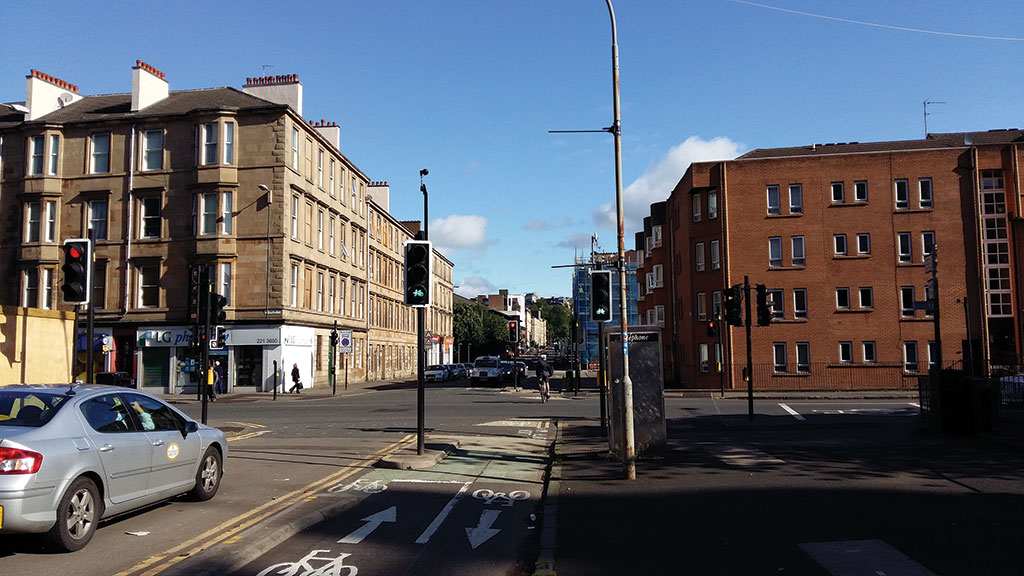 Policy-makers are waking up to the fact that cyclists and pedestrians have to be protected if multi-modality is to be a success. As a result, there is a thriving market in vulnerable road user detection but technology choice is an important factor in its success. Here, Q-Free TDC’s Colin Reekie talks about initiatives currently under way in Scotland.

Vulnerable road users — the collective term for cyclists and pedestrians — present traffic engineers with especial challenges. They are small, often numerous and often to be found in traffic monitoring situations which have complex geometries and occluded lines of vision. Modern bicycle design also means they have very little metallic content, which makes the use of inductive loop technology for their detection problematic. Bicycles are also highly likely to come off second-best in a collision with a car or larger vehicle.

Globally, as governments look to reduce overall numbers of those killed and seriously injured on roads whilst also looking to reduce transport’s environmental footprint, there is increasing recognition of the need to detect and protect vulnerable road users in crowded, multimodal traffic environments. This has implications both in terms of the types of technologies used and how it is deployed.

Q-Free TDC is currently helping local authorities in Scotland to monitor how they are supporting UK Government efforts to increase numbers of cyclists and build more sustainability and fitness into personal mobility. The national goal is to have 10 per cent of traffic in the UK be cycle-based by 2020, and so there is a real need to have specific data on how and where people are cycling.

Specifically at three sites in Glasgow, Scotland’s largest city, Q-Free TDC has provided a solution which has already been in successful operation for over a year in the Danish capital, Copenhagen. This so-called ‘Copenhagen Solution’ provides segregated cycle paths — that is, those protected from larger vehicles by a median or curb, rather than being in a mixed-traffic situation with only a painted line for separation — with signal prioritization and increased safety.

“In Glasgow, we are replacing existing solutions which are based on radar and cameras/magnetometers. These were having issues with over-detection, in that nearby pedestrians were triggering the cycle detection systems. The result was frustration for drivers in the adjacent lanes, because signal prioritization was being given to bicycles which simply weren’t there. There were also time-of-day issues, with one of the previous solutions proving unable to see bicycles at night,” says Colin Reekie, Q-Free’s Regional Account Manager for Scotland.

The Q-Free TDC HI-TRAC CMU (Cycle Monitoring Unit) is a piezoelectric-based solution which features roadside solar power and GRPS (cellular) connectivity. As a result, it is a very self-sufficient system to install — and one whose accuracy by comparison with inductive loops has been verified by independent testing, where accuracies of 98-99 per cent have been recorded.

The in-pavement piezo-electric sensors are installed approximately 25m (75ft) upstream from a signal site’s location. There are various installation options which can be used to address the local situation. For example, sensors installed at an angle to the path being monitored help to avoid mis-counts caused by cycles travelling side-by-side and effectively detect cyclists moving in a ‘cluster’.

Typically, the data-processing unit is installed in a path/roadside pillar. In Glasgow, Q-Free TDC has worked with its customer to integrate the equipment into a traffic signal controller. It processes parameters such as: wheel/axle spacing (to identify a bicycle); speed; and wheel width (to distinguish between cycles and mopeds). To trigger a call phase for cyclists to be given priority through an intersection, a closed-circuit relay provides a dry voltage output to the traffic controller. The call can be configured according to direction, a necessity where segregated paths are used bi-directionally in order to avoid false triggering when cyclists are heading away from the intersection. This obviates the need to get involved in traffic signal programming and simplifies installation/integration. The customer further benefits from the count and classification information which is of benefit to the authority’s cycle team.

The company has also installed or is currently installing CMUs at 23 sites in Edinburgh, the Scottish capital, as well as at 27 sites across various towns and villages in Aberdeenshire, in northern Scotland, Argyll, to the west of the country, and Fife, in the east.

Edinburgh in particular is a very tricky environment in which to provide vulnerable road user monitoring, Reekie continues: “It’s a mixture of dedicated cycle lanes, combined cycle/pedestrian lanes, and cycle lanes in mixed traffic lanes. In Edinburgh, the installations are on the City Council’s Cycle Route Network as well as on sections of the National Cycle Network, so we’re demonstrating an ability to accurately report in some very demanding conditions. Local authorities are keen to have filtered data which shows whether or not they are succeeding.”

Combined cycle and pedestrian detection solutions are also being installed at the majority of the above locations. Passive infrared systems are integrated with the detection equipment and can be installed to give an indicative count of pedestrians using shared cycle paths and footways. The data collected can be used by local authorities to determine whether there is a cycle/pedestrian conflict.

“A speeding cyclist is more than capable of inflicting serious injury on a pedestrian,” says Reekie. “Our pedestrian detection system uses a passive infrared sensor which works on the same principle as some burglar alarms. An invisible, conical beam is emitted from the roadside cabinet, although the precise location is site-dependent — sometimes you have to offset the beam from the cabinet. Directional information is provided by which side of the beam is broken first, and coupling of the infrared and piezo-electric technologies further increases the accuracies of cycle counts.

“Using simple time over distance calculations we can manipulate data to supply speed information — something which we’re doing on behalf of the city authorities in Edinburgh, for instance. It’s perfectly feasible to link that information to speed advisory signs which specifically address cyclists.”

Data fusion opens the way to quite a number of possibilities, both from the traffic management and individual traveller perspectives. The greater take-up of self-powered transport often requires incentives or, at least, the removal of disincentives. On days when pollution is particularly bad, for example, cyclists may need advice on whether to mask up or else use another mode of transport. At the major ITS exhibitions this year, the company has been exhibiting a cycling barometer which not only provides a highly visible display of cyclist using a given route but also offers real-time information gathered from linked sensors on air quality.