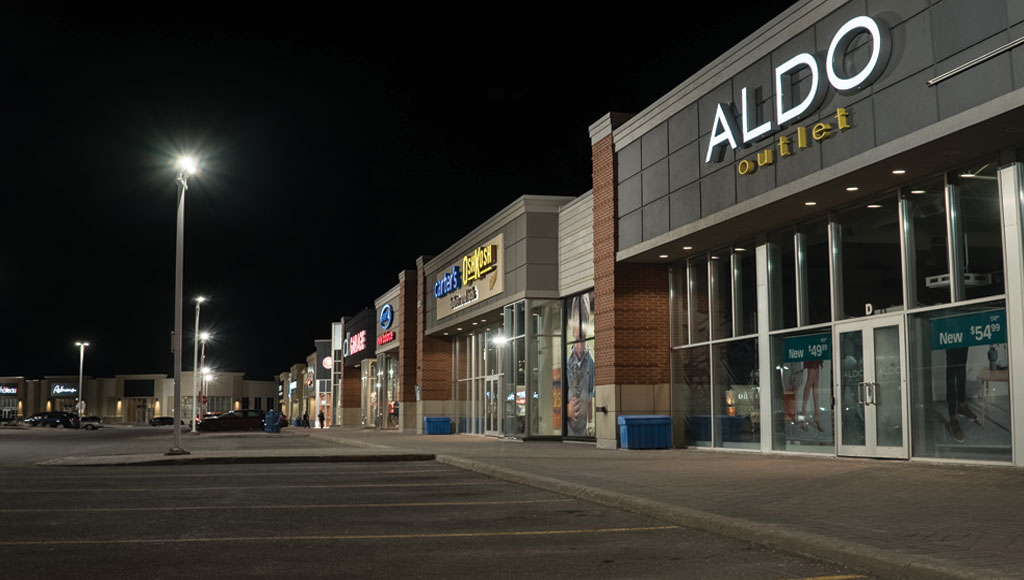 Anchored by notable retailers Loblaws, Home Depot and LCBO, College Square is a retail complex with forty-nine brand name stores, spanning 389,244 sq. ft. The shopping destination has been serving a busy area near Algonquin College, in Ottawa, Ontario since 2003.

“Saving energy was the primary concern,” explained Barbara Farber, for Leikin Management. “We also wanted to reduce maintenance costs, improve the aesthetic quality of the complex, and make the area even safer after dark.”

The property management firm teamed up with Concept Illumination, a company known for its exterior and parking lot expertise, to plan and execute the renovation, which was subsequently completed over two phases. First, wall packs along the rear of each block of buildings were replaced with the latest LED products.

With several of the then existing wall pack lights burned out and daylight hours shortening in the middle of the Ottawa winter, Concept Illumination understood the urgency of replacing the lighting as quickly as possible. Despite battling freezing rain and snow, the install of the wall packs was done within a day, minimizing disruption to tenants and ensuring that the complex remained a safe place to visit.

With the LED wall packs being more directional than the predecessors, it was possible to get light on the building in the exact distribution pattern required to illuminate columns and doorways. The LED wall packs used are 0°-90° adjustable, and are fixed in this case at 15° to enable sufficient aesthetic light on columns and walls, while throwing enough light forward and away from the building to be functional for illuminating the immediate surrounding areas.

Combined with the control of the light distribution, the 4000K colour temperature resulted in a uniform light which improved aesthetics significantly. Previously, the “mix and match” lighting scheme had displayed various colour temperatures, making some lighting look yellow and negatively impacting the visual appearance.

Flood lights were used to illuminate the storefront facades. One of the most impressive and striking aspects of the project is how all of the store signage now ‘pops’. Mounted on poles, LED fixtures bathe every store sign and storefront in an even, attractive light, again improving the aesthetic quality of the complex, but also enabling the stores to achieve maximum exposure to passing traffic.

The focus on aesthetics was not limited to the quality of the light. Each one of the pole mounted fixtures and flood lights were of the same style, resulting in the whole area blending with a common design aesthetic, even in daytime when the lights are off.

All of Leikin’s objectives were achieved with the lighting change.

Energy savings, the property manager’s main concern, are expected to be significant. The total energy savings are estimated to be 160,000 kWh annually. The project also qualified for incentives through Hydro Ottawa’s saveONenergy retrofit program. With Concept Illumination’s help, Leikin Management was able to apply for the program and succeeded in recovering around 20% of the overall project cost – an outcome with which Farber says Leikin is “very pleased”.

The property managers will benefit from reduced maintenance. The long life, durable LED products will not need replacing for tens of thousands of hours, reducing the resources required to address lighting failure.

“Typically, in a complex like this, a maintenance crew would need to come in several times throughout the year to change lamps or ballasts,” said Daniel Herz, the project leader for Concept Illumination. “It can get very expensive, and of course you end up with some lights not working at various times, leaving dark spots that can affect visibility and overall aesthetics.”

Herz also points out that traditional light sources, such as the HID ones previously used to illuminate the College Square parking lot, can be producing light at the source while not delivering adequate lighting levels on the ground. “HIDs burn out gradually. They will be on and look fine at the source, so they don’t get replaced. By the time they are replaced they have been ineffective for a long time, not lighting the area that they’re meant to illuminate.”

Herz estimates that a renovation project of this scale can result in as much as $20,000 in energy savings and $5,000-$10,000 in reduced maintenance costs annually. With those numbers, he expects an ROI of less than two years. With annual operating savings of this magnitude, the net present value of the project over the 10 year warranty period will exceed a quarter million dollars.

Tenant and customer safety has also been elevated with the installation of the new lighting, with visibility significantly increased for visitors and employees of the complex. And with LEDs performing well in cold weather, those benefits will continue throughout Ottawa’s cold winter months.

Aesthetically, the whole complex has benefited from being “brightened up.” The contrast between the illumination of the buildings and parking lots and the surrounding areas can be seen clearly in photographs taken after the renovation.

“We were impressed with the knowledge and service provided by Concept Illumination,” said Farber. “They were very helpful in assisting us to secure incentives through the saveONenergy program.”

“The power of exterior and parking lot lighting to impact the performance of a commercial facility should not be underestimated,” said Herz. “A well planned lighting renovation can improve aesthetics, increase safety, save energy, reduce maintenance and ultimately enable the facility to achieve a competitive advantage.”