Banff, Alberta awaits: A parking and transportation tale of the 2017 Conference Host Site 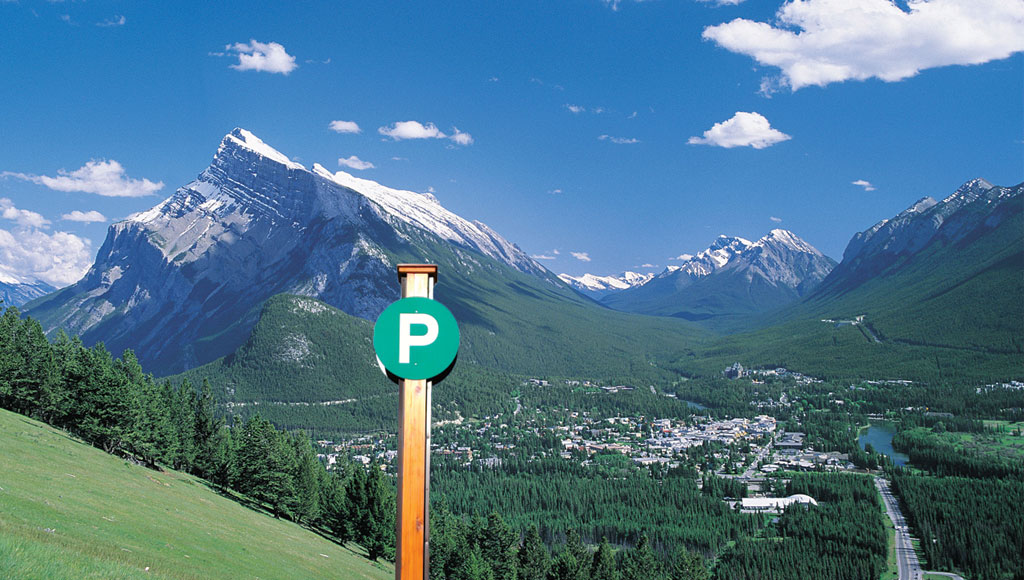 The town of Banff is set in the confluence of three river valleys in some of the most biologically diverse lands in Banff National Park. The town site, which is just under 4 square kilometres, sits at the foot of Cascade, Tunnel, Rundle and Sulphur Mountains, alongside the Bow River and serves as a base camp to the national park experience. Banff’s awe-inspiring landscape attracts millions of visitors come here each year to experience the Town’s UNESCO World Heritage Site setting.

With 93% of Banff’s 3.8 million visitors per year arriving in a personal vehicle, traffic congestion is an issue which has required considerable time and resources to manage in recent years. In 2013 a “congestion threshold” of around 20,000 vehicles per day (vpd) at the town entrances was identified. Beyond this threshold it was established that traffic congestion is inevitable given the finite capacity of Banff’s road network. Since 2013 a number of initiatives have enabled an increase in the congestion threshold to around 24,000 vpd. Parking plays a key role in the current situation, with visitors consistently reporting that finding a parking spot in Banff was one of the least satisfying aspects of their visit. Additionally, a significant source of congestion within the town’s core is thought to be associated with vehicles circulating while looking for available parking.

In response, the Town commenced a pilot project in 2012 to install real-time stall availability technology in the largest downtown parking garage. This involved the installation of a parking guidance system making use of overhead ultrasonic detection. Once acceptable accuracy levels were reached, stall availability signage
was deployed on the facility and on adjacent streets to help guide motorists to
available stalls.

Subsequent to the initial pilot, a parking guidance system for a surface lot was deployed making use of individual in-ground sensors. While the data obtained from stall-level sensors was promising, accuracy levels never reached an acceptable threshold due to a number of factors. As a result, the stall-level system was replaced with a facility-scale system which met the Town’s accuracy thresholds. Based on this experience, additional lots are currently being brought online, with a current inventory of 706 stalls being monitored (around 75% of off-street parking stalls). Off-site directional signage will be brought in at key decision points, including on-highway, town entrances, and in-town intersections.

Supplementing traditional signage is a range of online technologies including a mobile website targeted at parking users (banffparking.ca), an informational dashboard on congestion and parking aimed at key in-resort stakeholders (http://dashboard.banff.ca/), all aimed at providing real-time information to assist visitors, residents, and businesses in order to assist in decision making.

Ultimately the transportation goals for Banff are focussed around intercepting vehicles at the town entrances and transitioning visitors from vehicles to walking and transit. In a compact resort community, most key destinations are within easy reach on foot or by bus. However the primary obstacle in creating intercept parking has always been the availability of land. The efforts to secure intercept parking in Banff have recently experienced a seismic shift, when on April 25th, 2017 Liricon Capital Ltd. announced plans for an up to 900 stall mass transit parking lot which would be supplemented with shuttle service and pedestrian and cycling infrastructure. Making use of a former rail siding, the proposed lot would mark the first significant step forward in transitioning Banff toward a transit-based community, and removing congestion from the community’s roads. The Town of Banff is exploring partnership opportunities with Liricon around lot management, including the opportunity to expand existing parking guidance systems to the facility. The approval process for the new lot is expected to last through the summer of 2017.

Read more about this at:  www.rmoutlook.com/article/Gamechanging-mass-transit-proposal-for-Banff-20170427

I look forward to hosting delegates during their visit to Banff, Alberta from October 17 – 20, 2017 for the CPA’s Annual Conference and Trade Show.  Be sure to register on the CPA’s conference site and join sponsors Q-Free, and members of the Town of Banff’s parking operations on Monday October 16, 2017 from 10 am – noon for a walking tour of the town’s parking facilities and systems.